Minesweeper as a Technician Training Tool 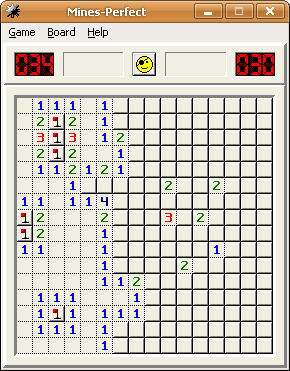 Since at least 2007, I have used winning the game Minesweeper as an assessment to determine whether adult students were ready to join technician training classes that I have taught.  And in 2010, I conducted a Minesweeper and Hypothetical Thinking Action Research & Pilot Study as my Master’s project, in which I found some initial indications that ones computer ability was correlated with their ability to play Minesweeper. (Although, the sample size of that pilot study was so small, it should not be considered as any form of proof)

And, as I prepare to start a new technician training program with Highlands Community Charter and Technical Schools, I am again using Minesweeper as a prerequisite assessment.

Based upon this past experience, I wanted to share my observations about students learning to play Minesweeper, and my reasoning about why I feel it is a valid assessment tool, and also share some strategies for new players on how to win at the game.

The first thing about Minesweeper that I should note, is that while I have been playing the game successfully since I was in high school, it has been the most challenging thing for me to teach to others.  I consider myself a very good teacher, and the number of thank you cards from students, high marks on student surveys, and being recognized in the past as Teacher of the Year for my school, gives support to this belief.  Yet, until a few days ago, I had never successfully taught someone to play Minesweeper, who wasn’t already naturally adept at it (and I cannot judge whether my recent work with a student was them having a latent talent for the game, or not)

The first obstacle I run into teaching the game, is that it is a game.  So almost always, if a student is not already good at the game, they don’t want to learn it, as they often see it as something that is not relevant to their future.  In fact, I am writing this article with my students in mind as the audience to help them understand why Minesweeper is quite relevant to them becoming computer technicians and/or programmers.

Minesweeper is an abstraction of how computer troubleshooting often works.  You often first start with no clues about where problems lie, and in the Minesweeper game, this is shown as an empty board, with none of the tiles being cleared.   In the game Minesweeper, underneath any of the tiles is one of 3 things:  there will be either a bomb (which you never want to hit), nothing (which is good), or a clue in the form of a number, and that number will tell you how exactly how many bombs are next to the cell (either to the sides, below or above, or diagonally).  The first time you click, you are “shooting in the dark”, and while you only have a small probability of hitting a dead end (by clicking on a bomb), you just have to take the risk.

After making your first click, you then can complete most of the game by using deductive reasoning, such that if you interpret the clues right you can always derive which unknown tiles are bombs, and safe to click on, and which ones are bombs, and will result in losing the game if you click on it.  (In real troubleshooting, it is rare to “lose” if you make a wrong choice, but it can be equally frustrating to go down a wrong path)

As in computer troubleshooting, in Minesweeper it is critical to understand the underlying rules of the system, and understand precisely what the clues mean.  It is also very helpful to have strategies about how to use the clues most effectively.  The strategy that seems to work best for most players is to find cells that contain the number one, that have only a single unknown next to it (which will always be diagonal to the 1).  This single unknown that is diagonal to a number one, must always contain a bomb, because the number 1 means there is only a single bomb someplace next to it, since there is only one unknown spot, then logic dictates that it must be a bomb.  By right clicking on that square that is unknown, a flag will appear which means you believe there is a bomb there, and as long as your deductive reasoning was correct, you will be right.

But Minesweeper also teaches us that our reasoning is not always correct, because there is nothing that prevents someone from putting a flag on any unknown tile, whether there really is a bomb under it or not. In fact as the picture illustrates, you can mark all the cells with flags if you want, but it doesn’t mean they all have bombs, in fact the -71 in the picture indicates that 71 of the cells don’t have bombs.   This fact that the player can mark something wrong, and won’t know until the end if they were right or not, is probably one of the most frustrating things about playing Minesweeper, and is also one of the most frustrating things about doing technician work, because if you make a logical mistake while you are problem solving, you will have all your other conclusions be wrong, and you often won’t know this for a while.

So the key to winning Minesweeper is to always make the correct logical deduction about whether an unknown cell has a bomb or not.  This generally takes focusing on a single clue at a time, and finding the specific clue that will be able to conclusively show which surrounding unknowns are safe to click on, or which ones are bombs, and should be marked with a flag. Further, it is equally important to use logic about which clues tell you that the corresponding number of bombs have already been found next to it, and thus it is safe to click on other cells next to that number.  This form of deductive reasoning occurs constantly while doing any computer programming or technician work.

In rare cases you simply have to guess, which often leads to losing the game, but this is something that generally only happens once or twice within a game if at all.  But as can be seen by the screenshot to the left, the player was able to clear all the mines using deductive reasoning, before they had to take a guess in the end.

My experience over time both as a computer technician and teacher, has convinced me that Minesweeper is a valid measure of deductive reasoning, that is reasonable to use as a prerequisite assessment for technicians.  What I am still unsure of, is whether the logical deductive ability that is required to play Minesweeper (and also required to be an effective technician) is something that can be learned, or is something that is more innate within a person.  As a teacher I want to believe that all my students can learn to think logically, but so far the evidence has been mixed at best, and in many ways has pointed towards thinking that some people really struggle with learning this form of logic.   But I will continue my efforts to teach Minesweeper, to see if I can find the specific stumbling blocks that stop some of my students from being successful.

Also, for those who are interested in learning Minesweeper, I have created a self-running PowerPoint file that explains some of the basic rules and strategies of the game: Learning_to_Play_Minesweeper 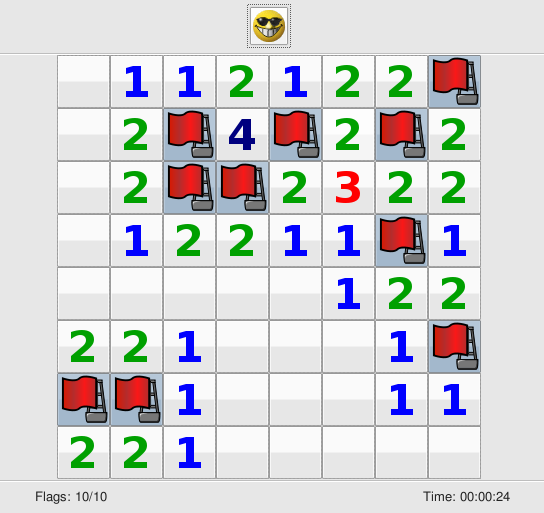